WHAT A CHARACTER!: The Detective Next Door 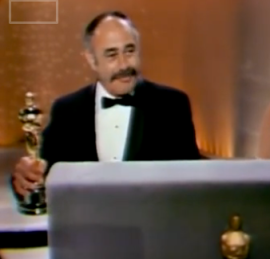 For our first year joining the WHAT A CHARACTER! blogathon, we focus on character actor Martin Balsam. Never a scene-stealer, Balsam played his parts assuredly, with little showmanship. You’ve probably seen him. He pops up in seventy movies from the 1950s to the 1990s, starting out as an uncredited heavy in On the Waterfront and continuing on to Breakfast at Tiffany’s and Catch-22.

His iconic film moment was stumbling down the stairs in Psycho as Arbogast, the detective who is handily dispatched by Mrs. Bates. Balsam and Anthony Perkins reportedly improvised some of their initial meeting (see it here), unusual under Alfred Hitchcock’s exacting direction.

Hitchcock brought out his calculating, slightly sinister side. More often, Balsam was the voice of reason, the confidante. See A Thousand Clowns, which earned him a Supporting Actor Oscar, rare for an actor under the radar. Even Balsam seemed amazed in his acceptance speech to beat showier Dr. Zhivago/Othello nominees. As non-confirmist Jason Robards’s square brother, Balsam’s character Arnold Burns climbed up the corporate American ladder and relishes the view. “I’m willing to live with the available world,” he says. “I don’t choose to shake it up; I live with it.” Balsam finds pride in Arnold Burns, playing him not as a Wall Street sleaze, but as an upstanding society man. And maybe for the only time, Balsam makes a flashy exit.

Other highlights of his lengthy filmography:

12 Angry Men (1957), Balsam’s first major big-screen role. Before Sydney Lumet cast him as Juror #1, he’d had a successful television career. In his unassuming way, Balsam’s juror takes charge, more concerned with corralling the men into doing their civic duty than which vote he casts.

Murder on the Orient Express (1974) marked another Lumet collaboration. Balsam’s Bianchi is best friend (surprise) to Hercule Poirot. Bianchi pushes Poirot to investigate the murder of a passenger stabbed twelve times. Balsam is an Italian-accented foil for Poirot to bounce suspicions off, but has some panache for detective work himself.

All the President’s Men (1976). Rarely top-billed, Balsam had major supporting roles in the seventies. He briefly appears in this Alan J. Pakula film about the Washington Post reporters who uncovered Watergate. Reteaming with Jason Robards, Balsam is the pragmatic managing editor, all business, reluctant to assign the breaking story to two neophytes.

Cape Fear (1962 and 1991). Decades after his role as the police chief, Balsam returned in Scorsese’s Hitchcock-esque 1991 remake. His real coup was reuniting Balsam, Gregory Peck, and Robert Mitchum (all from the 1962 original) for cameo appearances. Balsam is on-screen for just seconds as a judge, presiding over the film like the watchful eye of Old Hollywood. For a man who got his start beside Brandos and Fondas, watching movies change over the decades, Martin Balsam remained an expert at blending into the fabric of a film.

← Thing One and Thing Two
An Ode to Winona →