These memorable words, in Greta Garbo’s Russian-accented delivery, are part of her enduring image. She was the reclusive actress who shied from fame and publicity throughout her estimable career. In the context of Grand Hotel, directed by Edmund Goulding, Garbo’s depressed ballerina urges her handlers to leave her, so that she can remove her costume and forget the disappointing crowd at the performance. Garbo doesn’t employ any dramatics to get our attention in this scene; she doesn’t need to. The weariness of being a star came naturally.

The irony is that Garbo’s character isn’t alone at all; there’s a jewel thief (John Barrymore) waiting for her in the dark. Their fleeting flirtation will transform the weary Garbo into a woman open to the possibility of romance and fulfillment. 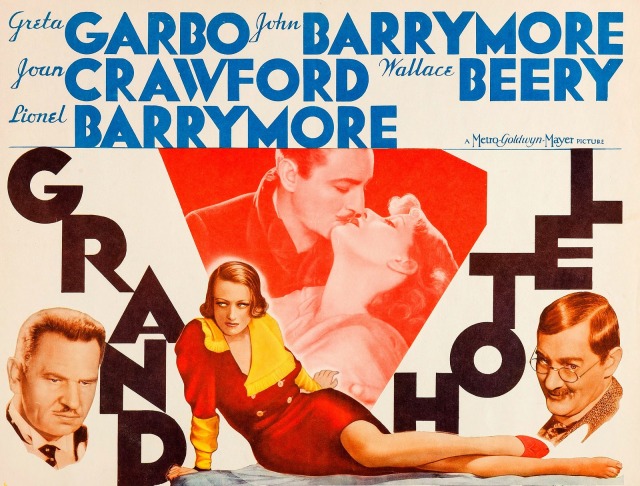 Grand Hotel was the first multi-star movie of its kind, and it became a model for other vehicles with famous people weaving through interconnected storylines. So began the longstanding tradition of overblown spot-the-star vehicles from It’s a Mad Mad Mad Mad World and Airport to Garry Marshall’s holiday calendar of dreck (Valentine’s Day, New Year’s Eve, etc.). But from this early inspiration, we also got the independent-minded ensemble casts of Robert Altman (Nashville), Paul Thomas Anderson (Magnolia), Quentin Tarantino (Pulp Fiction), and Wes Anderson (The Grand Budapest Hotel, naturally).

Though Garbo was the most famous, she’s curiously alone for most of the story–just like she wanted. John Barrymore is the only star she shares scenes with. And while Garbo’s presence is irresistible, Joan Crawford looms even larger for my money. Crawford is crucial to the main plot, and her early work here has an assured sexuality and a toughness she’d bring to her later characters from the indomitable Mildred Pierce to Johnny Guitar‘s Vienna. She’s not grandiose or mannered like she would become; her acting feels the most contemporary of the cast. Her character Flaemmchen, a stenographer, is a woman operating at the whim of men but not beholden to any of them. She finds a kindred human being in Lionel Barrymore’s Kringelein and, in a moving scene, chooses to leave everything behind and go away with him.

Lionel Barrymore wasn’t a romantic paramour, of course. He has some of the mannerisms of coded gay men in pre-Code cinema. He’s tremendously theatrical, with his crazy hair and oddball drunkenness, but he doesn’t ham it up too much. He’s affecting as a hapless man, overlooked and undervalued, who knows he doesn’t have long to live. The little man steeling himself against an oppressive society feels eerily prescient for this Berlin-set entertainment, just when the Third Reich was ascending to political power in Germany.

The overall roster of Best Picture winners from the thirties is stodgy. The Academy chose highbrow films that indicated a level of prestige, while the thirties movies we love now are much less stuffy: the tap-your-troubles-away musical, the racy pre-Code melodrama, the Prohibition-era gangster picture.

I suspect it was the stars and the glamor of Grand Hotel that led to a win, wrapped up in a story with drama, comedy, and romance wrapped in an elegant package. It’s a sophisticated movie all around, with more artful camerawork than many movies of its era. Look at the sweeping views of the lobby, or the long shot when Lionel Barrymore drunkenly stumbles around his hotel room. And Grand Hotel remains the best known movie of 1932, more iconic than the seven other movies nominated for the top Oscar.

Before the Oscars were judged on a calendar year basis, the first few ceremonies had different eligibility windows. This window apparently ran from fall 1931 to summer 1932, and the two movies we revere the most are classic examples of genre cinema: James Whale’s Frankenstein, which along with its sequel offered the most enduring Universal Horror movie monster; and Howard Hawks’ at-the-time shocking Scarface.

No matter the era, movies like this never get their due at the Oscars.