“Take friendships, for instance. I can think of a lot of cases where the two people have nothing in common. I think there’s a definite reason for every friendship just as there’s a reason why certain atoms unite and some don’t… I think friendships are the result of certain needs that can be completely hidden from both people, sometimes hidden forever.”

One look across a crowded room, two people with nothing in common: Carol begins (after a quick prologue) and ends with the same gaze. The young, seasonally employed Therese spots the wealthy Carol during her Christmas shift at a department store, selling dolls to holiday shoppers. Begrudgingly, she wears a store-mandated Santa hat, standing blankly at the customers. It’s only when her eyes meet Carol’s, when Carol comes closer to order a gift for her daughter, that Therese sparks. Her voice comes out stronger than we expect. She actually smiles. 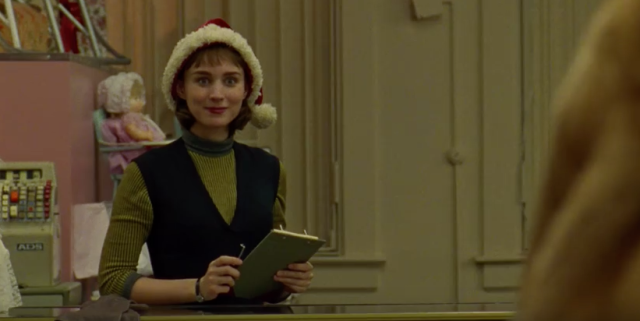 In the final scene, Therese and Carol’s eyes meet once more, and their certain needs aren’t completely hidden anymore. In Patricia Highsmith’s source novel, The Price of Salt, this look “was like meeting Carol all over again” to Therese. In a brilliant change from Highsmith, the movie favors both women equally; director Todd Haynes does not limit his camera to Therese’s point of view alone. Carol is not portrayed subjectively here, through the younger girl’s view. She’s a woman with her own clear desires. Chief among them is motherhood, and it’s heartbreaking the sacrifices she must consider to have rights to her child.

Highsmith’s novel is still a masterpiece of progressive fiction. The incredible longing she gives to Therese, mostly internalized, must have been incredibly surprising in 1952 (the novel was published under a pseudonym). The movie’s openness about female relationships and sexuality comes straight from the book. Highsmith allowed Therese and Carol to love, and to love each other. Todd Haynes and screenwriter Phyllis Nagy open the door further where they can, like when Carol shares a new scene with her friend and ex-flame Abby (Sarah Paulson). The intimacy of old lovers is there—the way they sit, comfort each other, clasp hands.

Beyond the physical—and the way characters touch is important to this movie—Haynes clearly delights in the beauty of the film frame. His lens (along with cinematographer Edward Lachman) points squarely at the characters, often without movement, as if he doesn’t want to interrupt them. You may find him overly reverent. When he finally abandons static shots, and zooms slowly into Therese or Carol’s faces, it’s like a fever rising. Haynes’s fifties Manhattan is glamorous, but not full of period winks like Mad Men’s sixties; he shies away from anything “retro” or kitschy. The store where the women meet is painted in muted pinks and greens, the film desaturated, like Haynes wants to avoid overpowering us this early on. So the film proceeds carefully as a kinship emerges.

Needless to say, Haynes casts well. Rooney Mara starts mousy and timid as Therese, and over her time with Carol seems to mature, more confident in what she wants. Still, her character stays oblique, always keeping a part of herself hidden, until the final moments. As Carol, Cate Blanchett appears to be a statue come to life—how Therese might see her. Gradually, her human imperfections and anxieties seep through. She’s a contemporary woman trapped in an unaccepting age. It’s not a showy performance; Blanchett is an inherently cool actress, which complements Haynes’s austere directing style.

This is not to say Carol is too reserved. The whole movie sits on the cusp of surrender. We’re witnesses to the last hours of Pompeii, just before the mountain erupts.

← Save the Last Dunce
THE BIG SHORT →