Save the Last Dunce

They say the novel A Confederacy of Dunces is cursed. John Kennedy Toole, the author, committed suicide years before his manuscript was discovered. Then multiple actors who tried to adapt the novel to the screen (including John Belushi and John Candy) died before they could crack it. After many attempts, the first high-profile adaptation is finally premiering here in Boston, written by Jeffrey Thatcher, and it’s a big fat step in the right direction.

Ignatius J. Reilly, our whimsical hero of sorts, is a man suited to the stage. He’s a delightful anachronism, equipped with a buoyant combination of wit and tactlessness. Ignatius finds himself superior when he’s really a living malaprop. And Nick Offerman captures his misguided spirit effortlessly. Offerman has the benefit of donning his costume—and his fat suit—onstage in front of us, greeting us with a smirk even before he becomes Ignatius. That irreverent look to the audience carries through the performance; there’s something lovable about the actor even at his crudest. 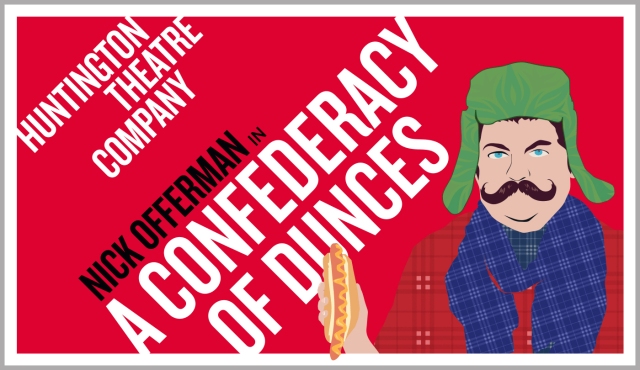 After Ignatius’s mother wrecks her car, and owes significant money in damages, she implores her son to find his first-ever job. This comedic bildungsroman follows Ignatius as he—at the age of 30—bumbles through New Orleans society in search of… well, hard to say what. Employment is not a priority; he scores a job at the local pants factory and then leads a (lamentable) uprising on the workers’ floor.

This job search is a central thread in a series of episodes about Ignatius and assorted local riffraff. But without a strong satirical voice narrating for us, the play doesn’t feel as absurd as it should. When Offerman leaves the stage, the other characters don’t project the same enjoyably outlandish behavior. There’s a whole subplot with a burgeoning stripper and her pet cockatoo, but it misses out on a lot of laughs. And the New Orleans milieu is faint, with minimal sets and only the occasional musical interlude. I was most interested in the two women in Ignatius’s life: his put-upon mother (an excellent Anita Gillette) and Myrna, his radical revolutionary pen pal. He’s so wrapped up in his own delusions, he doesn’t recognize how much these women care for him.

Watching Thatcher’s play feels like entering our leading man’s head. In the mind of Ignatius J. Reilly, he is the star, and everyone else revolves around him. When the slovenly lead is this charming, of course, it’s not hard to embrace his oafish innocence.  He is our fool, and we are his court.