The first trailer for David Fincher’s Gone Girl went online this morning, and despite the optimistic cover of “She,” the director’s trademark ominous sensibilities are in plain sight. Yes, David Fincher’s Gone Girl is the right billing, though Gillian Flynn obviously wrote the book. Fincher works best at reinventing pulp novels like House of Cards and The Girl with the Dragon Tattoo, submerging his characters in a no-man’s-land of neo-noir cynicism and violence.

Few directors working today have such a recognizable stamp. The man works steadily but takes his time on projects, sometimes stumbling through pre-production hurdles or backing off entirely. Gone Girl is his tenth movie since 1992. As a reward for having seen every David Fincher movie to date, I give you my ranking of his filmography. This list is only authoritative until the next time I watch one of these.

9. Alien3   A work for hire that Fincher’s disowned, Alien Cubed (?) has its moments. Despite primitive CGI, the scenes where the Alien chases inmates through the prison maze are choreographed expertly. On the other hand, the sacrificial climax is ridiculous, like it was cribbed from Halloween 27.

8. Panic Room   Jodie Foster often plays the brutalized-woman-no-more, but that’s her only motivation here. Though Foster’s engaging enough, the movie is underdeveloped. They have no life outside the confines of this story. Fincher is the star: his camera sweeps through the absurdly outsized, nearly vacant townhouse, penetrating through the walls and ceilings, reminding us of his omnipresent hand.

7. The Game   Just watched this weekend, and I can’t believe I sat through ninety breathless minutes for such a hollow ending. The Game was born in a culture that required twist endings, from The Usual Suspects and even Fincher’s Se7en. Perhaps with time, I can justify the wrap-up, and accept how enticing the journey was. The chilly mise-en-scene seems to close in on Michael Douglas as he struggles to survive.

6. The Curious Case of Benjamin Button   Working on a large-scale period piece, from a script eerily similar to Forrest Gump, Fincher lets us see how delicate and ephemeral our time on Earth is. Maybe this is why Cate Blanchett’s ballet dancer looks so wan. I admire the movie but can’t connect to it. Brad Pitt tries to be subtle, but comes out dull. I think Fincher’s better setting actors in a controlled environment and watching them react. These naturalistic characters somewhat elude him.

5. Fight Club   Even outside your college dorm, Fight Club‘s smart-ass dystopian comedy still zings. This movie is why I suspect Fincher’s style will outlast most of his sources, especially the increasingly juvenile Chuck Pahalnuik. He really gets the paranoia his characters feel, battling against forces much larger than themselves. And he directs his actors well: Brad Pitt’s on fire, Helena Bonham Carter is her beautifully absurd self, and Edward Norton catapulted to (short-lived) stardom. Cool ending #1.

4. The Social Network   Who knew the creation of Facebook could be smart and suspenseful and funny? This one doesn’t dig deep; you won’t feel much for the characters. But Fincher gives Facebook a fast-paced, old Hollywood glossy sheen, and energizes a story of contemporary greed and betrayal. Pour one out for Jesse Eisenberg, Andrew Garfield, and Justin Timberlake. Shame all the women are treated as nonentities.

3. Se7en   Cool ending #2: the box! But what a carefully constructed mind game of a movie to build up to that moment. Fincher hit the ground running in a movie distinctly his own, like a Dashiell Hammett mystery novel gone rancid. Brad Pitt was still finding his way, but Morgan Freeman anchors the movie, a safe harbor that balances out the grotesque visuals we’re subjected to. Fincher’s darkest work: destruction is inevitable.

2. The Girl with the Dragon Tattoo   I think David Fincher is delivering better movies these days. The surface chill is still there, but it’s not all about how cool or clever he is. Rather than submerge us in literal darkness, Dragon Tattoo turns Sweden by daylight into a spooky, cruel nightmare. This is a compelling and mature study of sexual violence and healing, with some hope of redemption. He hasn’t lost his dark humor by going mainstream. 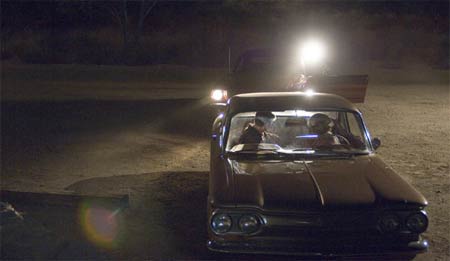 1. Zodiac   The movie I keep returning to. Zodiac never lets up; it simmers rather than boils, and never fully goes away. Fincher captures our national loss of innocence, when we realized violence could be random and unmotivated. All underscored with an ironic seventies soundtrack. An investigation builds only to fade over time, but the psychological damage remains. Like many of Fincher’s best, he plays with our expectations, filming a mystery never to be solved in a world never healed.

← Together Wherever They Go(dot)
BEST PICTURE REVISITED: PATTON (1970) →